The program of audio description of theatrical performances, which is addressed to people with visual impairments, started experimentally in 2000 and since then it has been implemented with great success. The program aims for the verbal rendering of images during a theatrical performance. The organization implemented this pioneering program, as in Greece the description is not provided by the theaters themselves in contrast to many foreign countries.

The describer conveys in words the image of those who exist or are played on stage, the sets, the costumes, the movements of the actors and the expressions of their faces. The description takes place during the pauses that are inserted between the dialogues. The describer does not intervene when there are sound effects, any songs and music during the performance. As the receivers hear the description through headphones that are not heard to the people next to them, it is possible for people with and without vision problems to watch the show together without any other special adjustments.

Each performance is preceded by a verbal introduction of about 15 minutes, which includes what is usually presented in the printed program of each performance: information about the author, the plot of the work, the distribution of roles and other information that is deemed necessary.

Many times, and if agreed, the experience is usually enriched after the show and with a “touch tour” of the costumes and sets combined with discussion and exchange of views with the actors of the show, a process that is highly appreciated by the spectators who cannot see. 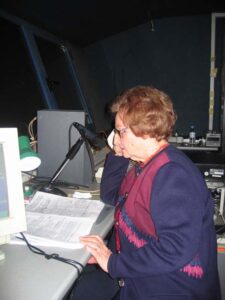 The “describer” specialist theatrologist, partner of ARTOGETHER undertakes the preparation of the audio description of each project separately. Close cooperation with the actors of the theater is required, at least four times while watching the show and a total of about 40 hours of editing the text which is then presented live during the specific performance inside a soundproof studio.

We would like to note that the describer must be able to adjust his description accordingly in the case of an unexpected event on stage. This detailed preparation is necessary and therefore it is difficult to make a successful prima vista description. The organization also provides special equipment that covers the needs of 20-40 people and the sound technician that ensures its proper operation. The ability to adjust the volume of the headphones by the users themselves even serves the hearing-impaired viewers.

The required technical equipment belongs to ARTOGETHER and is offered by the General Secretariat for Youth and the Ministry of Culture.

The success of the audio description program strongly confirms the big interest of visually impaired people in all forms of art, including those that society believes are almost excluded, which are theater and cinema, and that access to these art forms is not just desirable and possible, but mandatory for any society that respects diversity. 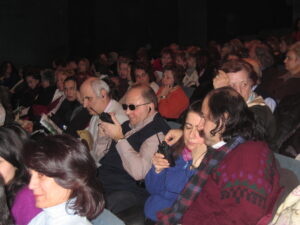 During 2008 we undertook the implementation of a special program called “Audio description of theatrical and cinematic works for the visually impaired”. In the framework of this program, the organization undertook the training of new describers and the approach of a new object, the cinematographic work for which there was no previous experience in Greece. Descriptions were made in four theatrical performances and for the first time, they were made in two dance performances. The most important step was made with the description of the movie “Political Cuisine” which had a very large participation and satisfied the entire audience that watched it.

Throughout the program, the contribution of the beneficiaries was valuable, who were invited to submit their opinions both at the stage of preparation and after the end of the performances at the stage of evaluation to record impressions and comments for improvement. The beneficiaries confirmed the great usefulness of the audio description, primarily for a better understanding of the work but also for its greater enjoyment, as well as for enhancing their sense of independence of the visually impaired spectators themselves.

The specific program was funded by the “Actions to support the employment of the unemployed with the active participation of Non-Governmental Organizations” and is part of the OP “Employment and Vocational Training” of the Ministry of Employment and Social Protection. The action was 80% co-financed by the European Social Fund.

Following an invitation from the Hellenic Cinema Center, we undertook the audio description of the 1st International Documentary Festival on the subject of disability “Emotion pictures”. The Greek documentaries of the competition section were described, as well as the foreign language documentaries of the opening ceremony. The Festival was organized in collaboration with the General Secretariat of Communication and Information and took place at the New Benaki Museum (June 16-18, 2007).

DESCRIPTION OF CINEMA WORKS AND DOCUMENTARIES

We use cookies on our website to give you the most relevant experience by remembering your preferences and repeat visits. By clicking “Accept”, you consent to the use of ALL the cookies.
Cookie settingsACCEPT
Manage consent

This website gr uses cookies to improve your experience while you navigate through the website. Out of these, the cookies that are categorized as necessary are stored on your browser as they are essential for the working of basic functionalities of the website. We also use third-party cookies that help us analyze and understand how you use this website. These cookies will be stored in your browser only with your consent. You also have the option to opt-out of these cookies. But opting out of some of these cookies may affect your browsing experience.
Necessary Always Enabled
Necessary cookies are absolutely essential for the website to function properly. These cookies ensure basic functionalities and security features of the website, anonymously.
Functional
Functional cookies help to perform certain functionalities like sharing the content of the website on social media platforms, collect feedbacks, and other third-party features.
Performance
Performance cookies are used to understand and analyze the key performance indexes of the website which helps in delivering a better user experience for the visitors.
Analytics
Analytical cookies are used to understand how visitors interact with the website. These cookies help provide information on metrics the number of visitors, bounce rate, traffic source, etc.
Advertisement
Advertisement cookies are used to provide visitors with relevant ads and marketing campaigns. These cookies track visitors across websites and collect information to provide customized ads.
Others
Other uncategorized cookies are those that are being analyzed and have not been classified into a category as yet.
SAVE & ACCEPT
Accessibility by WAH